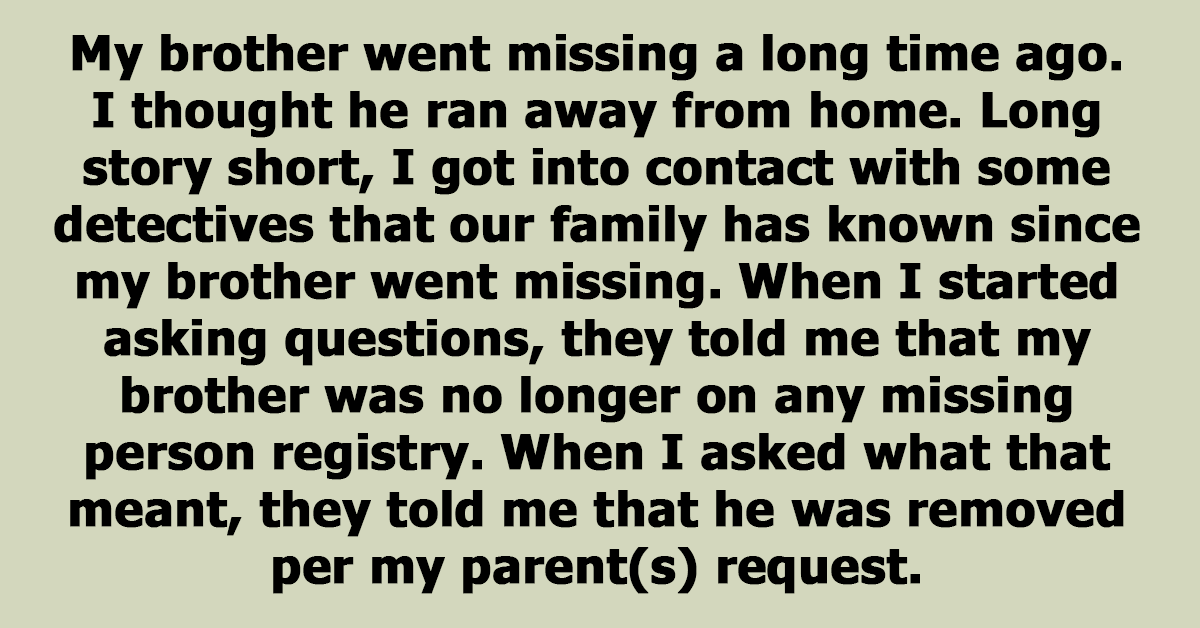 I asked my parents – my dad, actually. My dad ignored me. My mom told me my brother is alive and okay (“as far as she knows”). They found my brother years ago – a very, very long time ago – and found out he was living with another man. He’s gay, and it disgusted my parents. He tried reaching out to them. They told him they didn’t want anything to do with him and that I didn’t remember him and wouldn’t want to see him…..

I went ballistic. My parents weren’t fazed by it. They sincerely hate my brother for who he is – for being gay. They kept him a secret from me all my life. My brother missed the birth of his nephew, he missed my wedding, graduations, EVERYTHING, just because my parents lied to me.

I’ve been able to get a phone number and contact information from police officers. My brother left it all open in case anyone from our family wanted to contact him. I still can’t work up the nerve to call him. The address I have for him is across the country. But he’s alive. My brother is alive.

Later, throwaway4620048486 decided to contact brother and provided this update…

I woke up and called into work. I told my wife (who is essentially my confidant and I tell her everything) the whole story. She wasn’t really surprised; she’s not a fan of my parents much. But like many of you, she told me to call the number I was given for my brother immediately. She insisted on it. She took herself and my son out for a day together so I could be alone to talk with him.

I dialed the number about seven times before I actually pressed the call button. It started ringing and I hung up. Then I got frustrated at myself and called the number back. It rang and rang and I got a voicemail, but it was the automated voice, not anyone else’s. I didn’t leave a voicemail. I thought the whole thing was ridiculous. I called my wife and told her to come home and she refused until I had talked to someone on the other end of the phone.

About an hour of pacing and drinking two glasses of scotch at 1 o’clock in the afternoon, I called the number again. It rang three times. I panicked. I hung up. But this time, the number was calling me back. I swear to whatever God(s) above, I thought my heart was going to stop. I almost threw up right there. I answered the call.

The first thing I heard on the other end of the line was a guy laughing in the background. There was wind on the phone. The person on the other end was outside and it was windy. Who is this?

It was his voice. I knew that voice. It was my f***ing brother. My brother! Who had been gone for my entire life! I covered my mouth with my shaking hands and just sat there. He kept asking me who it was. The guy in the background was trying to talk over him. He hung up on me. I called him back right away. He answered again.

Me being a creepy ass, the first thing I said after decades of not seeing him and thinking he was dead, I blurted: I got your number.

He asked me who I was and what I wanted. I said, It’s me. There was a really long pause. I thought the call had dropped. Then I heard him tell someone to turn the radio down and roll the window up. The sound of wind stopped and then he asked me my name. I told him and he said that I was lying. I told him I got his number from the missing children’s network and detectives. I heard him gasp. He asked me what color shoelaces he wore to a picnic when we were kids, and I remember my mom getting mad at his orange laces with blue shoes. It was the last time we were together as a family.

I could tell he was crying. The first thing he asked me was: Where are you? and I told him I lived a few hours away from home. Without hesitating, he told me, I’m coming.

He went straight to the airport without any luggage, bought a plane ticket, and flew straight to me. We stayed on the phone with each other the whole time. When he was walking through the gate, I knew who he was right away. He is middle-aged; salt and pepper hair, muscular. He looks just like our dad, only better. I know if I told him that, that would make him mad.

I literally pushed an old lady out of the way and I just hugged him. He’s about two inches taller than me. He was able to pick me up. He was crying, I was crying. I was having a breakdown. We went to a bar at the airport. He wouldn’t let me out of his sight. He kept holding onto my arm. He kept telling me how unreal it all was. He apologized to me. He kept crying, telling me he felt horrible. I told him to forget everything and tell me about his life.

He’s married. His husband is a doctor pediatric oncologist. They live in the Pacific Northwest. They have two children girls, 12 and 8. He works as a legal consultant and has his own firm. He has an amazing life. He told me that he thought I hated him and wanted nothing to do with him. We sat at the bar for hours. Literal hours. I think we sat for about six hours before I begged him to come home and meet my wife.

We got home, and my wife was a mess. She hugged him and insisted he stay with us. At this point, his husband was going insane and kept calling him. He had no idea what was going on. He thought he had eloped or something. It was crazy for a couple of days until everything was explained and out in the open.

My son and my brother were like two peas in a pod. Honestly, I never wanted children. My son was an amazing accident, but I’m not good with kids. I’m always afraid I’m going to break them. But my brother is a pro. Kids love him.

My brother wants my wife and me to move to be closer to him. My wife is on board. I work as a professor at a university and have already started to send out feelers to see if there are any open positions, and I’ve found one that is actually tenured and higher pay.

I do not plan on forgiving my parents, but my brother still loves them. He went by their house and knocked on the door. My father shut the door in his face. My mother gave him a hug and told him to take care of himself. Then she shut him out. I cant forgive them for that. I have no reason to stay close to them. I want to be with my family. I want to make up for all the lost time.

Its 2 am right now and I’m drinking a tall glass of scotch and grading papers. My beautiful, wonderful, smart, amazing wife is asleep on the couch. She likes to watch me grade papers. My son is asleep in his room cuddled up with all the stuffed animals his uncle brought him. And Im here, so happy, so fulfilled knowing that my family has grown and doubled in size so suddenly. My heart is happy. I am so happy right now. I am so happy. When you die and go to heaven….. which part of your body goes first?